As everyone knows, “The Fool and the Flying Ship” is my all-time favorite story from Rabbit Ears and what I loved so much about this story was that the narration, the music and the illustrations all combine effortlessly to create one hilarious and wild take on the ancient Russian folktale!  Robin Williams was brilliant in narrating this story as he brought so much humor to the story and made the story fun to watch!  The Klezmer Conservatory Band’s music brings in a creative flair to the story and Henrik Drescher’s illustrations is the icing on the cake as they are bizarre yet creative at the same time and really brings in a unique spin on this ancient folktale!
So, what did you liked or hated about Robin Williams’ narration on “The Fool and the Flying Ship?”
Please feel free to answer below!

A great review on “The Gruesome Guide to World Monsters!”

Bibliographic citation:Sierra, Judy. The Gruesome Guide to World Monsters. Candlewick Press, 2005. ISBN 0-763-6-1727
Format Examined: Hardcover print
Annotation: Monsters from different folklore are explained.
Personal Reaction: I loved this book! I do enjoy a good scary monster tale. Little kids might actually get scared, however, because some of these monsters are reputed to be quite deadly. The monsters are all ranked on a skull and crossbones scale, five skull and crossbones being the deadliest. I thought that was a cute touch. There is a forward that explains that all these monsters come from actual folk stories from countries all over the world. I would recommend this book for very brave children! This book encourages print motivation with its very colorful (often bloody) pictures.
Age Recommendation: 2 and up
Website: http://www.judysierra.net/

Far away from anywhere big and important, in a little cozy cottage surrounded by fruit trees and berry bushes, lived McFig and his little daughter, Rosie. One day, a stranger named McFly and his son, Anton, bought the land next door. This was OK with McFig, as long as they weren’t noisy or smelly.

In fact, they’re just the opposite. McFig and McFly have quite a bit in common and get along marvelously. So marvelously in fact, that McFig helps McFly build a cottage exactly like his own. But when McFig also builds a tall tower with his leftover lumber — making his house just a teensy bit bigger and better — so starts a competition that will consume, and eventually end, their lives.

Here are some great valentine books by Hooray for Books!

From Zack Smith: Writer’s list, here are some bizarre picture books that you should definitely check out!

Happy New Year!  Thought I would get a few recommendations down as I got back to work.

These are some picture books that are so weird and wonderful and crazy that adults can enjoy them as well.  There’s tons of books like these out there, but these are a few of my favorites.

First, a recent one: 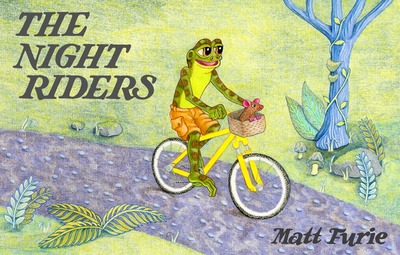 This is a really cool book by Matt Furie, whose artwork is colorful, surreal and kind of creepy…but overall, very gentle.

It’s a simple tale about a frog and a rat who go for a nighttime bike ride, meet up with some weird creatures who turn out to be friends, and then they all head to the beach together.

Furie does some crazy-detailed pages with creatures lurking in every corner, but despite the seeming threat of danger, the book is more about revealing all sorts of wonders around every corner, and will…

These are book reviews by Gathering Books about Klutz by Henrik Drescher and Roarr Calder’s Circus. Check them out!

“Ladies and gentlemen, boys and girls and children of all ages! Welcome to Burfoot’s Circus, the travelling home of freaks, misfits, drop-outs and the socially inept – sometimes all of the above – come together for your entertainment pleasure tonight, out of a love of performing in some cases, and simply fear of discovery in others.”
– Jackie Trippier Holt, Freaks Like Us

While I don’t remember watching the circus inside the Big Tent, I do enjoy watching acrobats, trapeze artists, jugglers, lion tamers, and other circus performers every chance I get. I’m particularly enamored by contemporary circus acts like the vibrant Cirque de la Mer who I saw perform at Sea World San Diego, and the visually captivating Cirque du Soleil. I watched Cirque du Soleil’s performance, KA, at MGM Grand in Las Vegas about five years ago with my aunt and uncle.

Rabbit Ears have created a wonderful series called We All Have Tales. The series had released a number of wonderful stories from around the world, but The Fool and the Flying Ship remained as my all-time favorite Rabbit Ears story. This story is based on Arthur Ransome’s classic Russian folktale, “The Fool of the World and the Flying Ship.” Of course, this version is funnier and more modern than the original Russian tale, thanks to the Russian voice talents of Robin Williams.

This is my most favorite story from the Rabbit Ears series because it is extremely funny, witty, and entertaining at the same time. Eric Metaxas’s writing is full of wit and humor and jokes that will have anyone laughing for a long time. My favorite part of the dialogue from this story was when the servant told the Tsar that there were peasants at the palace, but the Tsar thought that the servant was talking about pheasants. Robin Williams provided the voices for all the characters in the story in different Russian accents for each character, providing comedy relief from all characters. Also, I love the way how Henrik Drescher, the illustrator of this story, draws his characters with long and stringy limbs and weird attachments on their bodies, such as the Runner’s antlers on his head and the Sharpshooter’s popped out eyes.  The Klezmer Conservatory Band’s wacky European music is full of jazz and folk-like music that gives The Fool and the Flying Ship a very wacky and over-the-top feel to the story.

I think this story is going to be a favorite among both the adult audience and the younger audience for all time because of the story’s good humor and creative characters.