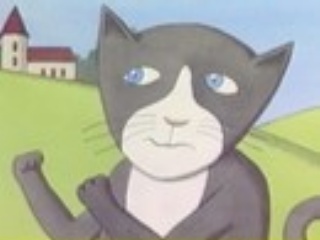 Finally! Rabbit Ears have managed to put out audio CDs of their fantastic series after being gone from television for over nine years! “Rabbit Ears Treasury of World Tales: The White Cat and the Fool and the Flying Ship” is audio CD that contains two stories that came from around the world that are narrated by famous celebrities along with brilliant music from well known musicians and it will be an instant treat for both children and adults!

Since I already summarize these two stories in my past reviews, I will just briefly summarize each story:

The White Cat
Told by: Emma Thompson
Music by: Joe Jackson
In this tale, the youngest son of a king tries to complete several difficult tasks set out from his father in order to inherit the kingdom. Of course, along the way, he meets up with a beautiful white cat and the young prince’s adventures soon begin!

The Fool and the Flying Ship
Told by: Robin Williams
Music by: The Klezmer Conservatory Band
In this tale, a goofy country bumpkin along with his crew of superhuman companions go off to the Tsar’s palace in a flying ship in order to complete several difficult tasks ordered by the Tsar.

Oh my goodness! This is absolutely my most favorite audio CD out of the whole Rabbit Ears Treasury series! I loved this audio CD because the narrations on both stories are truly inventive and creative and both narrators, Emma Thompson and Robin Williams, both bring excitement and humor to the stories they each narrate. In “The White Cat,” Emma Thompson narrates the story with such elegance and grace that the story comes off as being extremely soothing for both children and adults to listen to and Emma Thompson also brings tension and drama to this story when she uses a raspy voice to voice out the evil troll. Joe Jackson’s music is truly elegant and beautiful and it greatly brings true elegance to the story. In contrast,” The Fool and the Flying Ship” has a more hilarious and raucous tone thanks to Robin Williams! Robin Williams gleefully narrates this story with such energy that children and adults will be rolling around laughing for ages! Robin Williams’ biggest highlight in his narration was when he was voicing the Fool himself as Robin Williams uses a Russian accent to voice out the high pitched voice of the Fool. The Klezmer Conservatory Band’s music goes well with Robin Williams’ raucous narration as they are both full of hilarity.

Overall, “Rabbit Ears Treasury of World Tales: The White Cat and the Fool and the Flying Ship” is a brilliant audio CD for children and adults who love listening to stories from around the world and who love the talents of Robin Williams and Emma Thompson. I would recommend this audio CD to children ages five and up due to the story “The Fool and the Flying Ship” having some jokes that might be aimed at older children.

*~A Little Side Note~*
There is no book to go with this audio CD and many people who grew up with the Rabbit Ears series might be a bit disappointed, even though the narration is still top notch in this audio CD.